Following the successful launch of Bed Pod for accommodation providers, we’ve turned our attention to the great outdoors as we develop our next smart pest system - the Forest Pod. Spotta co-founder and CTO, Neil, and our entomologist, Aidan, headed north to Scotland for a real-world trial of the new system.

Working with Forestry and Land Scotland, Neil and Aidan set up the eight-week trial of Forest Pod, installing 25 units each of two different designs in a remote forest area. The Pods were installed alongside traditional Pine Weevil (Hylobius abietis) monitoring methods.

Traditional monitoring relies on Survey Technicians putting out billets - small, freshly cut logs used to attract weevils - and physically returning once a week to count the number of weevils. This method is highly labour intensive, something the Forest Pod is aiming to remove. By comparing the results of traditional methods to the two Pod designs, we will be able to gauge which Pod performs best in a real-world environment.

As well as reducing labour, Forest Pod will provide much finer-grained data on pine weevil population which will allow Forest Managers to make better predictions about future population levels. This in turn allows better decision making on fallow periods and pesticide sprays. 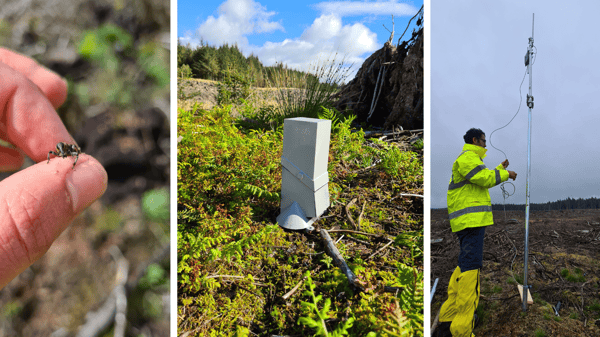 How damaging are Pine Weevils?

Pine Weevils (Hylobius abietis) cause £40 million damage to woodland and forests in the UK each year. The insects are found in the northern latitudes of Europe and Asia, although the population is seven times higher in the UK than mainland Europe. They eat bark on saplings, killing them before they are strong enough to withstand the pests. Pine Weevils are capable of causing vast damage to the Forestry industry, and are able to decimate an entire coupe (a small forest area which is designed to be harvested in a single operation). By identifying the pests quickly, treatment will be able to be more effective and efficient, reducing the damage they cause to forests and woodland as well as reducing pesticide use.

When the eight-week trial is complete, Neil and Aidan will return to Scotland to retrieve the test Pods, and inspect the billets alongside the Pods. The data generated throughout the trial will allow us to refine the design of the Forest Pod, before we undertake another trial in the near future. Like any new technology, testing is a key stage of development and we’re expecting positive signs as well as some learnings to be able to enhance the Pod before the next trial stage.

Spotta’s smart pest systems utilise AI technology to identify and monitor pests which cause damage to businesses and the environment. Contact us to register your interest in Forest Pod or any of our future product development.